So, I held off on the details of eating out just because I knew it would be plenty of material for a post in and of itself.  Let me say this: eating out in Rome was absolutely amazing.  Nearly every time I ate something there, it was like eating the best whatever it was that I had ever had.  Just incredible.  The other big pro to eating in Italy: it's cheap!!  John and I consistently had an appetizer between us, two mains, and a half liter of wine for around 25 euro.  Just insanely cheap.

A few places for those who may find themselves in Rome: Vecchia Roma, Petrucci, Tre Pupazzi, Le Tavernelle, and Perdingianu & Croccorgia.  These were my absolute favorites of the places we hit- and all but one were recommended by the concierge.

Le Tavernelle:  The very first place we ate in Rome and it did not disappoint.  Complimentary Prosecco with our meal wasn't a bad way to start.  I had a delicious, but simple, ravioli stuffed with cheese topped with parmesan (remember, this is the place where they thought I wanted more cheese).  The fantastic thing about this dish was the light coat of olive oil that the ravioli was served in.  There was a basil leaf sitting on top of the dish, and you could taste it in the oil.  It was amazing.  Delicious.

Vecchia Roma: Old Rome, run by Fabio, and we were always waited on by what appeared to be his son.  We were also always brought bruschetta before our meal, in addition to the delicious bread basket.  The tomatoes were so ripe!  It was absolutely perfect.  The best bruschetta I've ever eaten.  I got (yes, both times we went) the spaghetti carbonara- and it was divine.  An egg sauce and bacon with spaghetti, topped with parmesan cheese.  How can you go wrong? 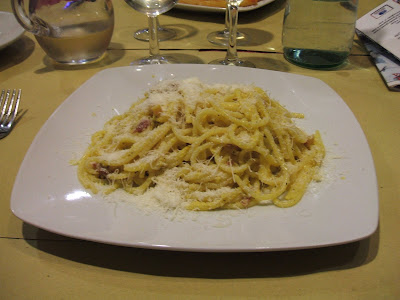 Tre Pupazzi: Recommended by Rick Steves, this was a yummy place to eat.  John and I both had the special: fettuccine with porcini mushrooms and truffle.  Let me just say, if you ever get to order something with "truffle" in the title, do not miss the chance.  It was really delicious.  No sauce to speak of, but again, served in an incredible olive oil.  This time, instead of basil, it tasted truffle infused.  Yum! 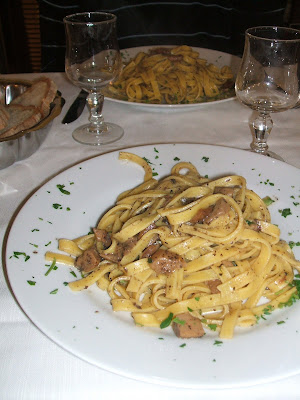 Petrucci: This was another dinner spot near the hotel.  We ordered antipastos della casa (house appetizers) and were served a HUGE platter with fresh slices of mozzarella and tomatoes, fried eggplant, fried zucchini, bruschetta, meats, cheeses, and olives. This was incredible.  The bruschetta had amazing flavors.  The tomatoes were ripe, it was absolutely perfect.  Best bruschetta I've ever eaten (this sounds familiar...).  We were both so full after the appetizers, but we had each ordered a main as well.  I had pesto potato gnocci, John ordered ravioli with smoked (which was translated as "smooched") salmon.  While I wasn't nuts about the gnocci (I'd never had it before), the pesto sauce was incredible.  John's was delicious as well- the smokiness was lovely with the cheese stuffing.  This was also where we had the best tasting house wine.  At most of the places we ate, a half liter was about 4 euro. 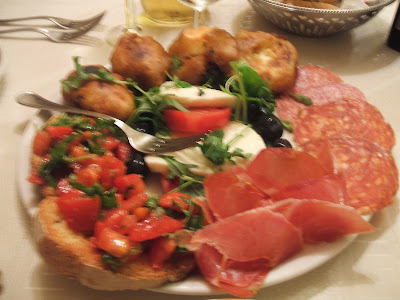 Perdingianu & Croccorgia: Our last dinner out in Rome.  This was a Sicilian inspired restaurant and was an interesting foil to the other food we had eaten.  They had similar menu items, but with slight differences.  Here, we also got the antipastos della casa.  Again, meats and cheeses, but this time the meat was spicy (thank goodness John tried it first) and the cheese was a soft, maybe goat's milk, cheese and a pecorino (one of my favorites).  The eggplant slices were grilled, not fried, and there was also olives and a slice of grilled red pepper.  My dinner was amazing.  I had tortellini with a creamy sauce with ham and mushrooms.  I can't post my exact words when I ate my first bite, but suffice to say, it was tasty.  Beyond amazing.  I have no idea what John ordered, but I definitely won the main course contest (though his was pretty good too).  Dessert, on the other hand, was a bit of a let down.  I ordered tiramisu and I was so excited.  What I got was some soggy cake at the bottom of a bowl with vanilla pudding on top, sprinkled with cocoa powder.  John won the dessert battle, ordering Catalina Crema, a similar pudding cup but with a topping that tasted like caramelized sugar.  Yummmm 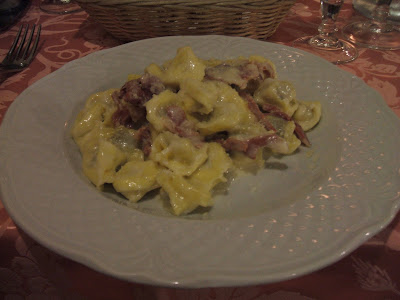 I will say this about eating in Rome: it was hands down the most consistently amazing food I have ever encountered.  *However* our success was entirely thanks to the guidance of Rick Steves and our hotel's recommendations.  We did try to eat out on our own once and we were not met with success (may I refer you to the blog entry previous to this).  So, eater beware: avoid the tourist spots and try to eat where the locals are.
Posted by Holly at 6:38 AM