John and I started the day with breakfast on the roof top garden and it did not disappoint!  A selection of rolls, cheeses, meats, and fruits along with juice, cappuccino, coffee, and about 20 kinds of tea.  The only bad thing about the morning was it was raining.  But, we figured we had weathered Ireland well enough, and so we took off on the metro to go to Vatican City.
The Vatican Museum was stunning and overwhelming.  There was art literally everywhere.  The ceilings were painted, the walls had art, there were sculptures all around, and even the marble flooring was beautiful.  My personal favorites were the Map Gallery (just for the sheer abundance of color and art) and the rooms with paintings by Raphael.  He wasn't one of my favorite ninja turtles, but the rooms (particularly the Constantine room and the Liberation of St. Peter) were spectacular.
One of the most inspired parts of the Vatican Museum is, of course, the Sistine Chapel.  If I thought the rest of the museum was overwhelming, this was beyond.  Of course, the creation of man was spectacular, but I also really liked the Temptation of Eve, which has the serpent looking like part man, part tree, part snake. 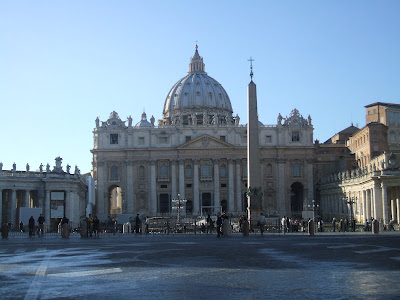 After we went to the Vatican Museum, we had lunch at another amazing restaurant (this time recommended by Rick Steves).  Then, we moved on to St. Peter's Basilica.  Again, absolutely stunning.  The inside of the church is amazing.  It is absolutely gigantic!  Here is also the original Pieta sculpture by Michelangelo, which was another highlight for me.  Then, John somehow convinced me to climb 551 steps with him up to the top of the cupola.  In addition to the gorgeous views from the top, at about the half way point, we got to go inside the church again where we were up close and personal with the art at the tops of the interior arches.  What had looked like paintings from below were actually massive mosaics.  It was pretty amazing.  We reached the top (finally) and the views were breathtaking.  The rain had stopped and the sun was out and it was just incredible to see all of Rome all around. 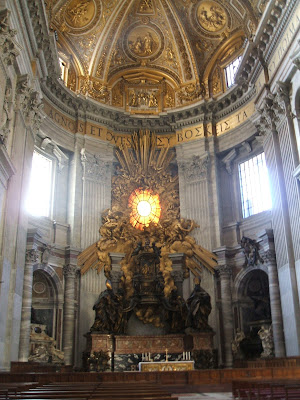 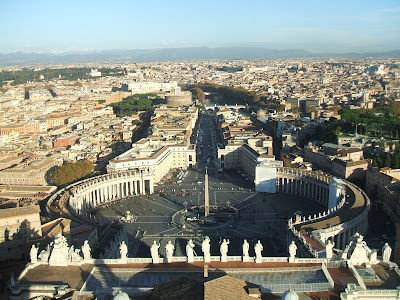 After our adventures there, we wandered back to the hotel for a small (and much needed) rest.  Dinner that night at Petrucci provided another superb meal.  Unfortunately, we had to wait a while to go to eat, as we were informed that restaurants wouldn't be open for dinner until at least 7:00 pm.  Fortunately, on the other hand, we didn't have to wait quite as long as we thought as we also found out that we had been operating an hour behind all day due to the time change. 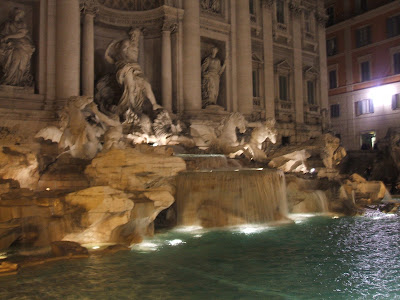 After dinner, we were off for a night walk where we saw Trevi Fountain, Piazza Navona, and the Pantheon.  There were lots of people out and about and a bunch of street vendors selling art, jewelry, and the usual knock off handbags.  We were so exhausted at the end of the walk, that we grabbed a cab to drive us the short trip back to the hotel.  Slept like a rock.
Posted by Holly at 10:39 AM