Armed with a large supply of digestive aids, John and I took off from Dublin to Rome for what would be 4 blissful, though exhausting, days.  The flight itself was fine.  Ryan Air, as would be expected, doesn't give anything complimentary.  However, we did spring for the priority Q tickets and got to pick seats in the emergency row so John would have some extra leg room.  Unfortunately, we ended up seated across the aisle from a family with a young boy.  I just knew it would be rough.  Surprisingly, though, it was the father who caused most of the problems.  From drumming loudly on his meal tray with pens to arguing with the flight attendant about returning to his seat for landing, he was not a very pleasant man.  On the bright side, there was an off duty flight attendant seated by the window in our row who switched seats with me so John and I could see Rome lit up at night as we landed.  We saw the Colosseum and St. Peter's Basilica from the window.  It was beautiful! 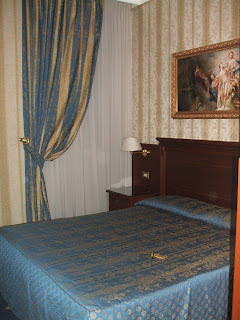 We checked into our hotel after getting overcharged for a taxi ride (note for future travels: don't tip the cabbie when they charge 4 euro extra for transporting 3 carry on sized bags), and the hotel room was stunning.  Lush fabrics covered the walls and it was just gorgeous.  The front desk concierge recommended Le Tavernelle for dinner and it did not disappoint.  Delicious pasta and free prosecco served with the meal.  Not too shabby!  Despite some tummy troubles from traveling, I could tell I would like my time in Rome when I stopped the server to ask for more water.  Before I could ask for water though, his first guess was that I needed more parmesan cheese.  Any place that always assumes you need more cheese is alright by me.

Since we'd gotten in relatively late (though we later found out that we had gotten in even later as Rome was an hour ahead of Dublin), we decided to hit the hay, looking forward to breakfast on the rooftop patio.
Posted by Holly at 12:35 PM