Day three started with another great breakfast at the roof top garden.  Then we were off to the Colosseum!  Somehow, we never noticed on our first days in Rome that the Colosseum was visible down the street from our hotel.  It was pretty spectacular to see.  Once we go to the Colosseum it was just amazing.  (Side note for the Minnesotans, the Romans had a retractable tarp to cover the Colosseum in case of bad weather.  And the Twins have...?)  There really isn't a way for my to describe the Colosseum- it was just beautiful.  And through some of the arches, we had great views of the Arch of Constantine.  It really was just spectacular. 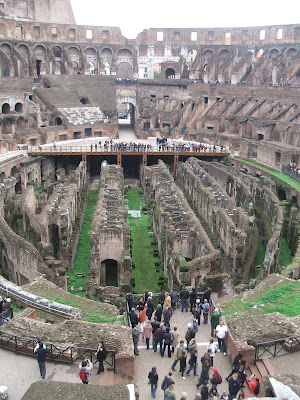 After the Colosseum, we moved on to the Roman Forum.  This was really pretty and I got a lot of great pictures, but it wasn't as interesting to me.  I'm not sure if it was residual exhaustion from the trek the day before, but it wasn't my favorite stop along the trip.  We walked all over the Forum and then up to Palatine Hill, which gave more spectacular views of the Forum and of Rome in general.  I think amazing views was a theme for the trip.

After the Forum, we were on our way to Bocca della Veritas, of A Roman Holiday fame.  Along the way, we walked along the Tiber River, which has had its banks built up extremely high after a flood several hundred years ago.  We also walked through Circus Maximus, where the chariot races used to be held.  Much more dangerous than NASCAR, though John wondered which way they turned.  We got our little touristy photo op with the Mouth of Truth and then we went through the Jewish Ghetto, where we stopped for some delicious kosher food.  From there, we were off to the Pantheon, which we had seen before on our night walk.  The outside was having some reconstruction done, so it was half covered with scaffolding, but the inside was really pretty.  The Pantheon was originally a monument for all religions, hence the name. 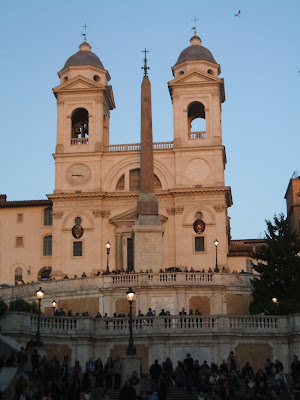 On the way to our next destination, we did a little window shopping, which turned into actual shopping when I found a great pair of shoes (much MUCH cheaper than the ones from Dublin that I ended up returning).  Then it was back to window shopping as we passed by Chanel, Dior, Dolce and Gabanna, Missoni, Escada, Prada, etc.  I might have drooled, just a little bit.  Then we were at the Spanish Steps.  It was absolutely milling with people.  Particularly with guys carrying bushels of roses and trying to force three on you as you walked by "I give, I give."  No thanks.  We climbed (yes, more steps) to the top of the Spanish Steps just in time for a beautiful sun set. 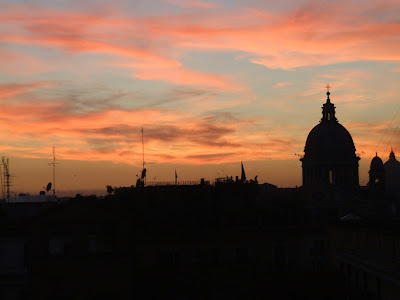 The day ended like all of our days in Rome: with a fantastic dinner and an exhausted crash into bed.
Posted by Holly at 11:09 AM