John is here and has been for several days now.  We've had a terrific time!  Some highlights of the trip so far:

A real Irish breakfast at the Quays.  Included black sausage (aka black pudding, blood sausage, blood pudding) which was delicious and much better than the white sausage in my opinion. 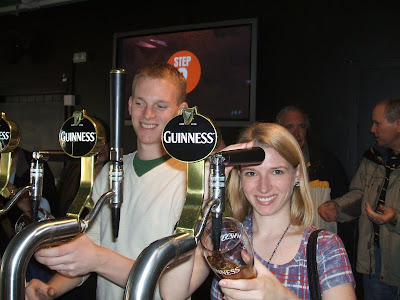 The Guinness Storehouse.  Still worth the money- this time I (we) learned to pour the perfect pint.  We also met a couple from St. Paul- small world!

Jameson Distillery.  NOT worth the money.  Save the eleven euro (student price), go to a bar, and get three shots: Jameson, Jack Daniels, and Johnny Walker Black Label.  Then you'll have the taste test all set up without the horrible tourist trap feeling tour full of mannequins and stuffed cats.  It was definitely not my favorite part of the trip thus far.  But now, I am officially a whiskey taste tester and I have the certificate to prove it (along with one proving I can pour the perfect pint.  I might frame them both and hang them alongside my J.D.).

National Library.  Bought Kim her requested book on Yeats, got one for myself as well, and a free t-shirt!  Walked through the Yeats exhibit which was neat.  I would have loved to have had a few more spots with readings from his works.

National Gallery.  Very cool works here.  While there was a lot of strangely shaped children (from the era in which painters gave children the same facial proportions as adults), the Jack Yeats exhibit was terrific and there was one room with highlights from a closed wing that included a Picasso and a Monet.  Very pretty. 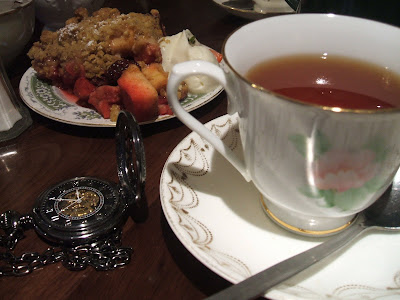 Queen of Tarts.  Lovely place for tea and some blackberry apple crumble.  I had an Alice in Wonderland moment.

The Winding Stair.  Despite not having reservations (note to self for next time), they were able to seat us and we had a fantastic meal.  Absolutely delicious food and I would go back over and over again.  Even though we only had the table until 7:00, we never felt rushed by the servers and were waited on attentively.  My spinach, mushroom, and feta parcel was amazing.  Highly, highly recommend.

We also stayed right next door to Oscar Wilde's house.  Speaking of Oscar Wilde, we saw some workers fixing his statue.  Apparently he lost his head, literally.

Tomorrow we are off to Rome and I could not be more excited!  I will try to post an update or two while we're there.  But I'll be taking notes so I can blog when I get back too.  Cheers!
Posted by Holly at 4:15 AM