One Week to Go

I cannot believe that my time abroad has dwindled down to one remaining week.  I've been holed up in my dorm room the past several days working on my last paper before my school work is complete, so I haven't been able to get out and do much more in the way of adventures.

I figured this would be a good time to reflect on all the things I've gotten to do, a sort of highlights reel.  It's easy to lose sight of the great things here when I'm so excited to be home for the holidays, so I also wanted to make a list of the things in Ireland that I will miss when I'm gone.

Looking back, I may not have gotten around to flipping at trampoline club, but I have a pretty good list of things I've gotten to do and see.  And so I don't forget in my haste to see family, friends, and fiance again, that there are things I will miss in Ireland, they are: Bulmers, Guinness (properly poured), snails on the sidewalk, frequent rainbows, bright pink and deep red hydrangeas, fuschia, black currant flavored foods, banoffi pie, being sea side, mars bars (and mars bar rice krispie treats), free time/alone time/leisure time (though sometimes I think I've had too much here), the fact that school closes with 3 inches of snow, black pudding, the chocolate!, electric tea kettles, and listening (some might call it eavesdropping) to people talking just to hear their accent. 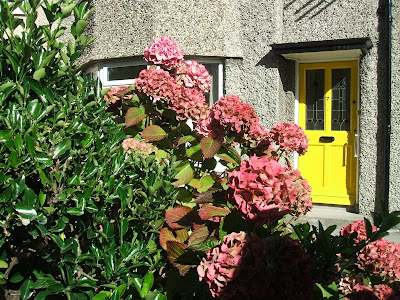 As much as I will miss these things and others, I am very much looking forward to the trip home and some big, long hugs (and Caribou's hot chocolate...).
Posted by Holly at 1:48 PM