Today Sören, his girlfriend Bai, and I went to the Black Forest.  It was fantastic!  We took a train there and the views were spectacular.  We actually went through a large part of the Black Forest as we made our way to Titi Lake (Titisee).  It's called the Black Forest because it's almost entirely pine trees, so even in winter the whole forest looks dark.  The train went through a part of the forest called Hell Valley, which was immediately after a town whose name translates to Heavenly Kingdom. So, we went through heaven to get to hell and the other way around on the return. 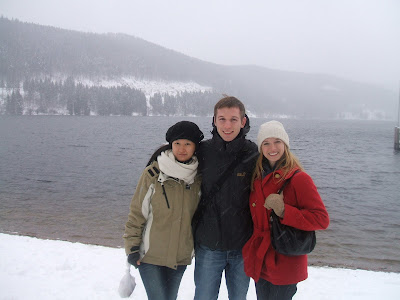 When we got to the Black Forest, it had started to snow.  We made our way to the lake and walked along the shore.  There were tons of mallard ducks and one big goose to keep us company.  The snow and wind off the lake had us a little chilled, so we stepped into a cafe for some hot drinks and Black Forest cake.  From there, we walked by a building that had an enormous clock painted on its side with working hands.  It was about as tall as I was.  Above the clock hands were two figurines, and above them was a bird.  I assume they dance and cuckoo, respectively, but we weren't willing to stand outside long enough to find out. 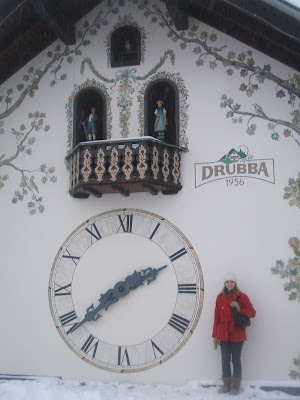 We went into lots of little shops and there were cuckoo clocks galore.  Every shop sounded like my Grandma's house (she has 6 in one room).  I wish I could have bought one, but I had to settle for a few small gift items instead.  Toward the end of our trip, the snow had started to come down pretty heavily, but it was so pretty that it was hard to be bothered by it.  The whole place looked like a Christmas card!

Back in Freiburg, we emerged from the train to rain.  Not quite as pretty as the snow had been.  But the Christmas market at night made up for the rain completely.  Christmas lights were everywhere.  Up and down the streets, on the booths at the market, above the paths, and in the trees.  The three of us shared some potato pancakes, a pretzel, and more mulled wine.

I couldn't resist buying myself a few more ornaments, but the best purchase was the gift I got for my Grandma.  I had been disappointed that I didn't find anything for her in the Black Forest, since she's cuckoo for cuckoo clocks.  Unfortunately, besides 100 euro clocks (and those are the cheap ones!), the only other thing they seemed to sell that was in the shape of a cuckoo clock was thermometers.  But in Freiburg, I found her a wonderful hand carved wooden nativity scene that is also a music box.  But don't tell her, it's for Christmas. :)

Tomorrow, I leave this Christmas paradise and head back to Ireland, where it will be back to the grindstone for me.  One more paper to write, followed by some serious revisions.  But for now, I will sleep in heavenly peace.
Posted by Holly at 4:39 PM