Well, it's been a week since my last post, and frankly nothing much has happened.  BUT, now Kim and Brent are in town!!  It was so nice to see friendly and familiar faces when they arrived at the airport, but Kim's hair has gotten so long that I almost didn't recognize her!

First things first, I asked Kim to be one of my bridesmaids (I had to wait until we were together in person- it was so hard not to ask her over g-chat!).  Once that was settled, we took the airport coach to their hotel, the Burlington Hotel on Upper Leeson.  The hotel is gorgeous (they got it in a package deal with their airfare on travelzoo) and fortunately, their room was ready.  They checked in and I hung out in the room while they took turns freshening up from their long day of travel.  Then we left the hotel in search of food.  We cut through St. Stephen's Green and got a bite to eat at Sheehan's.  Pretty good fare- I had a toasted sandwich with cheese, pickles, and tomato which was surprisingly yummy.  Brent had (of course!) a Guinness, and Kim got some traditional Irish Stew.  We then took a more serious stroll through St. Stephen's Green, taking pictures by the Joyce and Yeats statues, until Kim and Brent decided they needed a nap.  So, they went back to the hotel and they napped while I got some serious reading in Ulysses done (I'm now proudly 100 pages in). 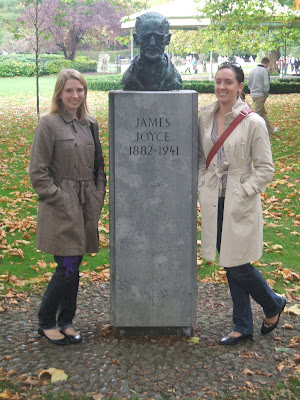 After nap time was over, we wandered through the city center and just caught up on life.  We looked around Grafton Street and went into a couple of shops.  We walked up the River Liffey, over the Ha'Penny Bridge, which I was informed Yeats hated, and finally ended up in Fitzgerald's on O'Connell for dinner.  Kim and I split the fish and chips special and Brent had what looked like a really delicious steak.  By the time we left, it was time to call it a night so the weary travelers could get a good night's sleep.  So absolutely wonderful to have friends in town!
Posted by Holly at 3:53 PM