It's been a bit since my last post, but with good reason- my family is in town!  Actually, the more accurate reason is that I have had absolutely no luck connecting to the internet at our hotel.  Apparently, the wired internet is not functioning on my laptop.  But now, since I'm in class I figure it's a perfect time to post an update of some of the highlights of the visit so far.

Mom and Dad arrived safely, though two hours late from New York.  We made it into the hotel in Dun Laoghaire, had some lunch, and spent the day getting settled.  Saturday, we were off to Malahide Castle.  Unfortunately, we didn't get very far.  The train that typically runs to Malahide wasn't running past the city center due to construction.  So, we altered plans and headed off to the city center instead.  There, we wandered through St. Stephen's Green, saw Dublin Castle and the surrounding grounds, and shopped on Cows Lane. 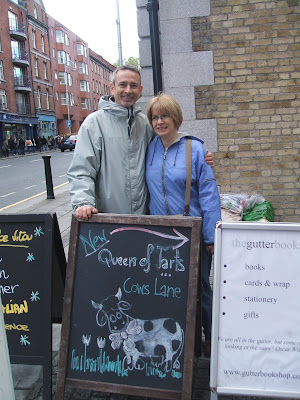 The next day, we rented a car and drove to Gort, a town in County Galway.  On the way there, we stopped at Clonmacnoise, the beautiful ruins of an old monastery.  It is located almost exactly in the middle of the country and has a large cemetery with beautiful old head stones.  It's also on a river (the River Shannon, I think) and provided spectacular views.  From there, we headed to Gort to meet up with a work acquaintance of my dad's.  It was a winding, bumpy road, but we got there eventually.  We met up with Michael, his wife Angela, and children Isabell and Orrin (4 and 2), and then got right back in the car to follow them to the Cliffs of Moher.  Another winding, bumpy road, but (again), we got there eventually.  I cannot even describe how spectacular the views were.  I took a million pictures, but I'm sure they don't even do it justice- not even close.  What was even more amazing was the drive out of the cliffs.  We took the coastal road back to Gort which gave us astounding views of the sunset over Galway Bay.  Once the sun had set, the moon came out: low, full, yellow, and huge, it was absolutely beautiful reflected over the waters.


Michael and Angela's home was stunning and their hospitality was just great.  We stayed the night and had a huge breakfast in the morning.  The most exciting part was the black sausage.  Black sausage is also known as blood sausage (eek!).  But I was very brave and gave it a try anyway- and it was delicious!  I even had a second slice.

It was so nice there that we didn't want to leave, but not wanting to overstay our welcome we headed off to Galway City for some shopping.  Again, an amazing time.  The highlight of the trip was a store called O'Maille's.  They sell woolen goods, many of them hand knitted by the shop's owner, a lovely woman who teaches knitting classes all over the world.  Dad and I both bought scarves there- I got two and actually got a discount somehow!  100% lambswool and 100% beautiful.  (Mom also made a purchase there, but it's a gift for someone who might happen to read this, so it'll stay a secret)  We chatted with the woman and found out that the shop had actually made all of the costumes for The Quiet Man, a John Wayne film that was filmed in Galway.  They even had the Singer sewing machine that had made Maureen O'Hara's costumes still in the store. 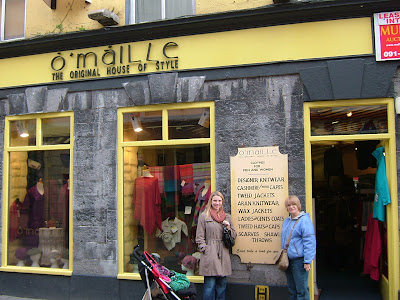 All in all, it's been a fantastic time- despite the bumpy, car sickness inducing, roads.  Today, Mom and Dad are adventuring on their own in the city center while I'm stuck in class (blogging).  Tomorrow, we're off to London and then Paris!  I'll be bringing the laptop with me, so hopefully I'll be able to post a few updates of our new adventures. (pictures to come)
Posted by Holly at 4:01 AM