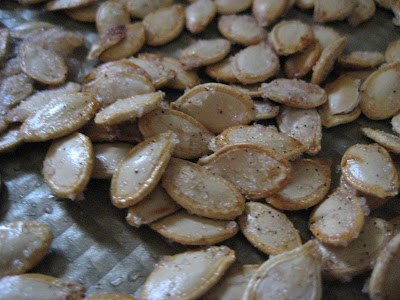 This is a recipe from Real Simple and it's true to the magazine's name.  After carving our pumpkins, I wanted to be sure and use some of the seeds for a tasty snack.  We had more than the recipe called for, so here are my ingredients:


First, clean the seeds in a bowl of water, rubbing them between your hands.  If you have some stubbornly slimy seeds, pop them in a colander after and run water over them 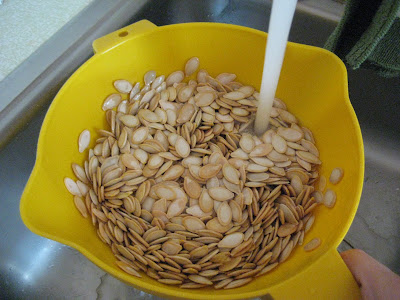 Pat them dry on a paper or dish towel and spread them out on a baking sheet.  The Real Simple recipe calls for a rimmed baking pan, but we didn't have one large enough.  I risked it on a rimless one and it turned out fine; you just have to be a little more careful :)
Bake the seeds at 300 degrees until they are completely dry (after about 50 minutes mine were already toasty), then pull them out and toss them in the butter, sugar, salt, and cinnamon. 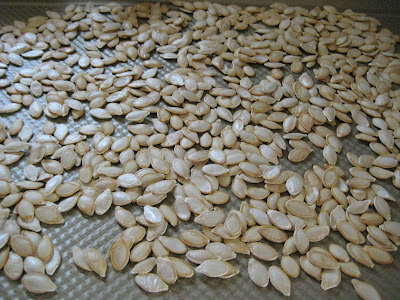 Turn the oven temp up to 350 and toast the seeds until they're golden brown.  Since mine were already pretty well toasted in the first round of heating, I put them in for just around 8 minutes. 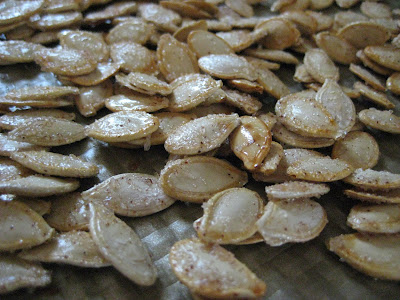