A String of Saturdays

I have had a string of interesting Saturdays this month of April.  Each Saturday was something very different from the Saturday before.  They ranged from the Malpractice Ball (law school prom), the gun range (2nd Amendment Day), a bridal shower, and egg dying.  My Saturdays have certainly been varied.

The Malpractice Ball is an annual event that pairs the law school and the medical school in a formal/semi formal dance, the idea being that doctors and lawyers only get together in malpractice suits (har har har).  Each year there is an open bar, some pretty bad food, and lots of ridiculousness.  This year wasn't much different, except that the med school students didn't come.  Despite their absence, we were only 100 less in attendance.  I had originally hoped to find some tacky dress (sequins, taffeta, animal print...), but sadly the uglier the dress was the more expensive it was as well.  So instead, I donned my top hat and party shoes and had a great time dancing the night away.

The following Saturday could not have been a greater departure from a cocktail dress and sequined shoes.  I made my way with John to the U of M police department gun range for the second annual law school hand gun day.  We celebrated our 2nd Amendment rights with a 40 caliber, but the grip was so big that my finger barely reached the trigger.  I decided to switch to the 1911 45 caliber that I used last year.  The instructor joked that it was typical- the shooter blaming the gun- but my back to back bulls eyes put an end to any teasing. 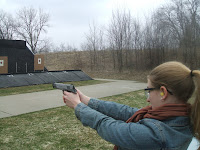 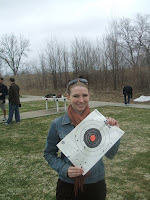 The Saturday after the gun range, I traded in my 45 cal. for a pretty skirt, brunch, and bridal shower games.  John's aunt generously offered to host a shower for me and it was lovely.  The food was fantastic, the company was great, and I even got to meet John's newest relative: his cousin's baby boy.  Oliver was the only boy allowed at the shower, but John stopped by at the end to say hello and to help load the wonderful gifts into the car (we used a bunch of them the next day for a home made brunch for two). 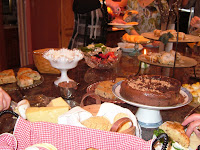 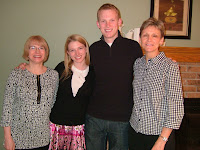 And here we are on the final Saturday in April, the day before Easter.  Ever since my brother and I moved out of the house, it's been a yearly tradition to come home and dye eggs.  And that is precisely what we did today.  John and I made our way down to the suburbs where we dyed eggs with my brother, sister-in-law, and Dad (Mom just watches). Another part of this tradition is that there is always an "ugliest egg."  Here is this year's winner: 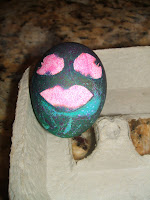 I myself prefer to make pretty eggs :) 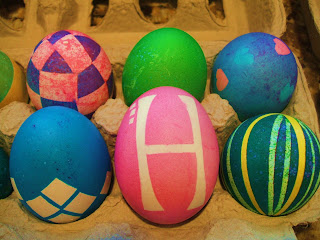