I love fall, I really really do.  It's chock full of comfort food and this year I intend to take full advantage.  When I ran across this recipe from Martha Stewart for twice baked butternut squash, I knew I had to try it.  The portions looked out of control to me though (an entire butternut squash per person?? that's a lot of squash), so I decided to do my own version of it.

I took one butternut squash and prepared it by cutting it in half, lengthwise, and scooping out the seeds. 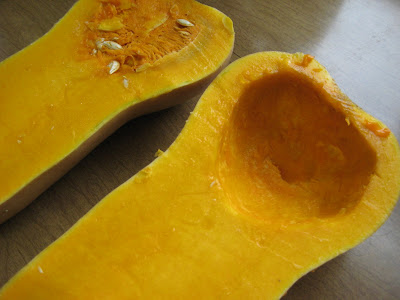 Since we don't have a roasting pan, I used a pyrex casserole dish and baked the squash for almost an hour at 450 before the halves were tender.  Once they were tender, I scooped out both halves into a bowl, making sure I left a rim around one half for when I re-filled it. 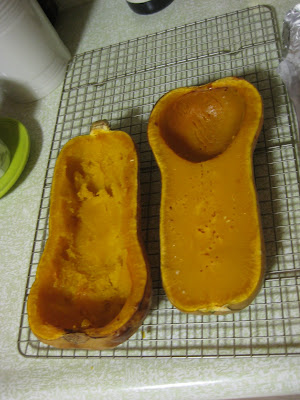 I added about a spoonful and a half of sour cream, sprinkling of paprika, and enough chives to be evenly distributed throughout. 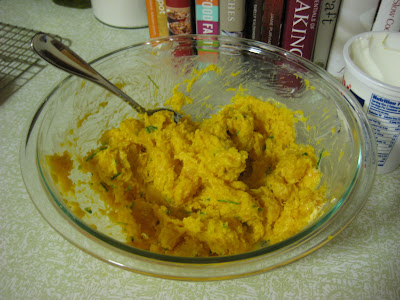 Then I re-filled the squash, topped with bread crumbs, and popped it back in the oven for about 20 minutes. 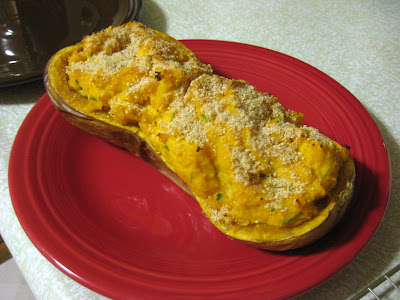 Yum!  I split this in half to share between myself and John.  I also made one excellent addition to Martha's recipe.  Once the squash was split, John and I topped our halves with grated parmesan cheese.  It was a delicious (and filling!) dinner.
Posted by Holly at 7:56 AM