After eating Steak n' Shake and lots of comfort food in Missouri, hosting a cookie exchange, and noshing on s'mores on the 4th of July, I'm feeling the need to do a dietary overhaul.  A 4th of July post on belle maison gave me a great idea to start the health kick: Garden Sliders.

The ingredients are simple and pretty darn healthy: tomatoes, cucumbers, yellow squash, great northern beans, and sliced baguette.  I made the beans into a paste, grilled the squash, and stacked them up for a delicious and healthy dinner! 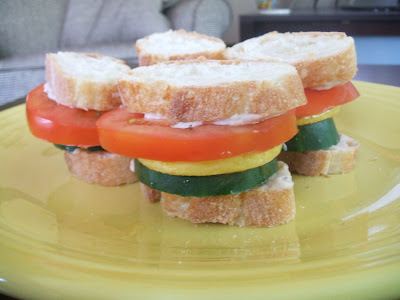 The recipe called for roma tomatoes, but the ones at the grocery store were literally molding (ew!), so I went with slightly over-sized vine ripened tomatoes instead.  Also, the bean paste was supposed to have Italian Seasoning, but I substituted basil and oregano instead and it turned out quite well.  We have some of the paste left over, and it makes a tasty dip for chips and veggies.

They were a little tricky to eat, but delicious! (added bonus, just 120 calories per slider)
Posted by Holly at 4:39 PM